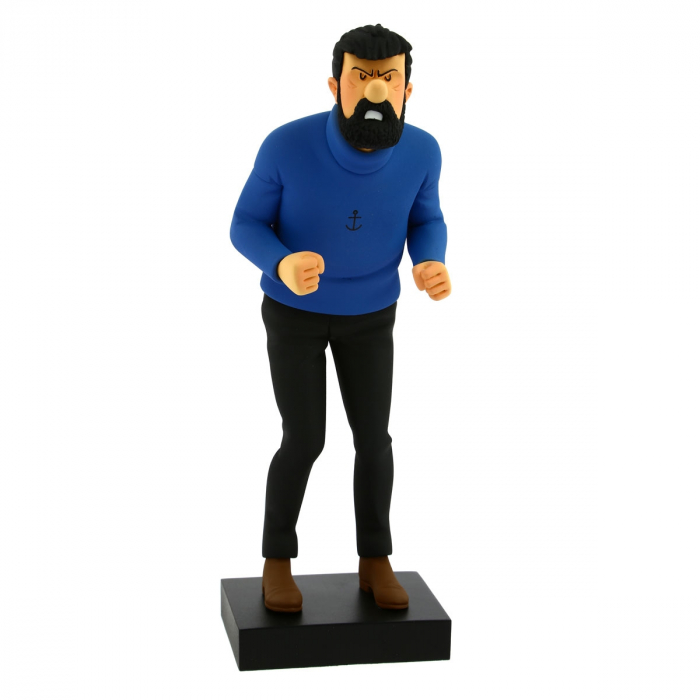 This fine sculpture of the The Captain Haddock is based on Hergé's drawings. The hand-painted resin figurine is made in France at a highly reputed “atelier”, to a limited production run of 1500 copies.

Captain Archibald Haddock (French: Capitaine Haddock) is a fictional character and a major protagonist in The Adventures of Tintin, the comics series by Belgian cartoonist Hergé. He is Tintin's best friend, a seafaring Merchant Marine Captain.

Haddock is initially depicted as a weak and alcoholic character under the control of his treacherous first mate Allan, who keeps him drunk and runs his freighter. He regains his command and his dignity, even rising to president of the Society of Sober Sailors (The Shooting Star), but never gives up his love for rum and whisky, especially Loch Lomond.

In the adventure Secret of the Unicorn (and continuing in Red Rackham's Treasure) he and Tintin travel to find a pirate's treasure captured by his ancestor, Sir Francis Haddock (François de Hadoque in French). With newfound wealth and regaining his ancestral home Marlinspike Hall, Captain Haddock becomes a socialite; riding a horse, wearing a monocle, and sitting in a theatre box seat (The Seven Crystal Balls). He then evolves to become genuinely heroic, volunteering to sacrifice his life to save Tintin's own in the pivotal Tintin in Tibet. In later volumes he is clearly retired.

Throughout it all, the Captain's coarse humanity and sarcasm act as a counterpoint to Tintin's often implausible heroism. He is always quick with a dry comment whenever the boy reporter gets too idealistic.