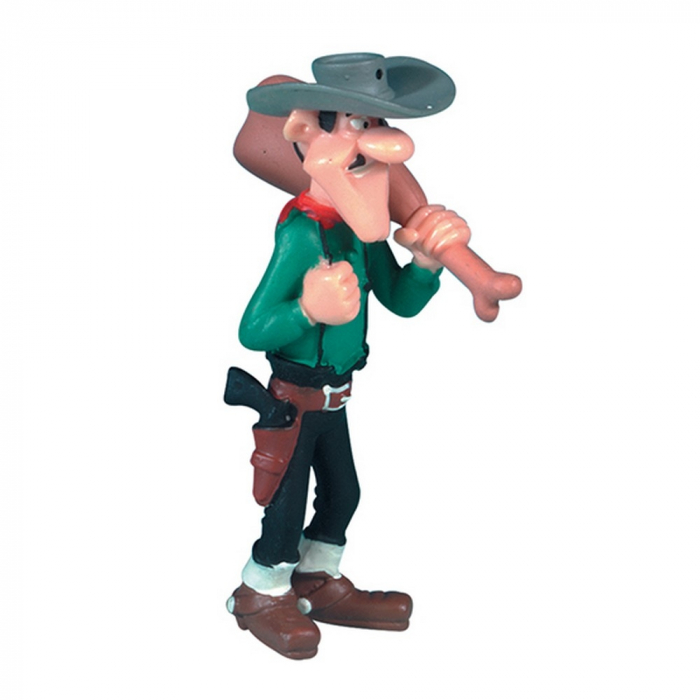 Collectible figure based on the classic cartoons and comics Lucky Luke: Averell Dalton with a ham. Height: 6cm

Morris regretted killing the Dalton gang which had proved popular with readers and decided to invent a second quartet that are introduced as cousins of the originals. By this point, the series had become more humorous and the violence featured was more slapstick and less lethal. These entirely fictional brothers are Joe, William, Jack, and Averell. They look just like their cousins and again each one of them is taller than the previous one, though they vary in personality: from Joe the hot-tempered leader to the dim-witted childlike Averell whose thoughts are focused mainly on food. These Daltons have appeared in many of Lucky Luke's adventures, typically breaking out of jail at the beginning and being sent back by Luke at the end. The prison dog Rantanplan is often assigned to help Luke in tracking them down.

Averell Dalton is the tallest, youngest and most stupid of the Daltons. Obsessed chiefly with food, Averell is sometimes prone to eating various non-edible items such as soap, which he finds delicious. His very limited understanding of any situation and tendency to goof make him the weakest link of the gang. Averell is actually rather good-natured and not particularly interested in criminal activities, but he has almost no will of his own and simply follows his brothers. He likes rather girlish things such as sewing and dancing. As a result of his good behavior his rewards for his capture are often very low unlike his brothers.