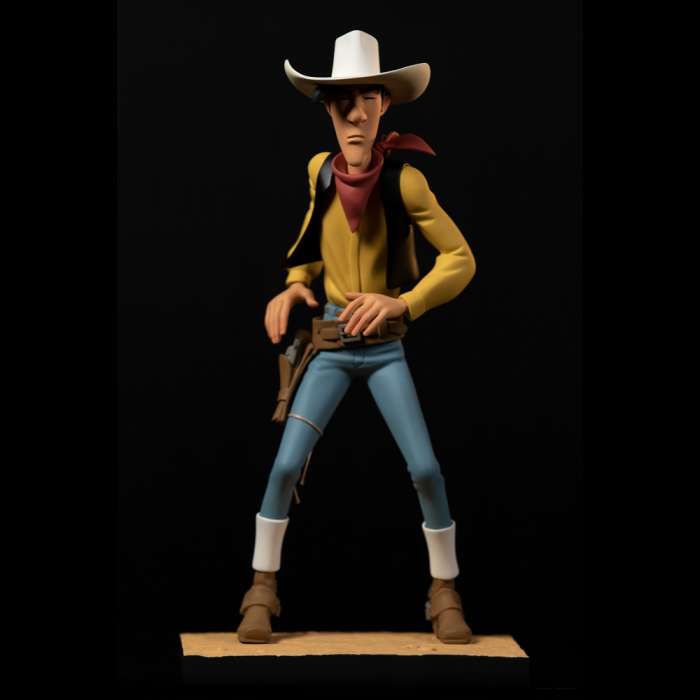 Resin figurine made from a sculpture by Pascal Rodier, assembled and handpainted in Fariboles Productions Workshop (100% Made in France). Lucky Luke by Matthieu Bonhomme. Limited edition and numbered 390 copies with a certificate of authenticity drawn and hand signed by Matthieu Bonhomme. Height: 24cm.

Lucky Luke is a Belgian comics series created by Belgian cartoonist Maurice De Bevere, better known as Morris, and for one period written by René Goscinny. Set in the American Old West, it stars the titular character, Lucky Luke, the cowboy known to shoot faster than his shadow.

Matthieu Bonhomme was born in Paris on June 17th, 1973. He was soon spending much of his free time drawing and, in his final years at school, he studied for a vocational qualification in art and design, gained in 1992. His encounter with Christian Rossi, and then Serge Le Tendre and Jean-Claude Mézières, was decisive. Matthieu spent the next five years learning from them, receiving valuable advice about the profession in all its many forms. He put this advice into practice when he embarked on various pieces of work (cartoons and illustrations) for several magazines such as Spirou, Je Bouquine, Grain de soleil, Maximum, D-Lire, Image Doc, and others.