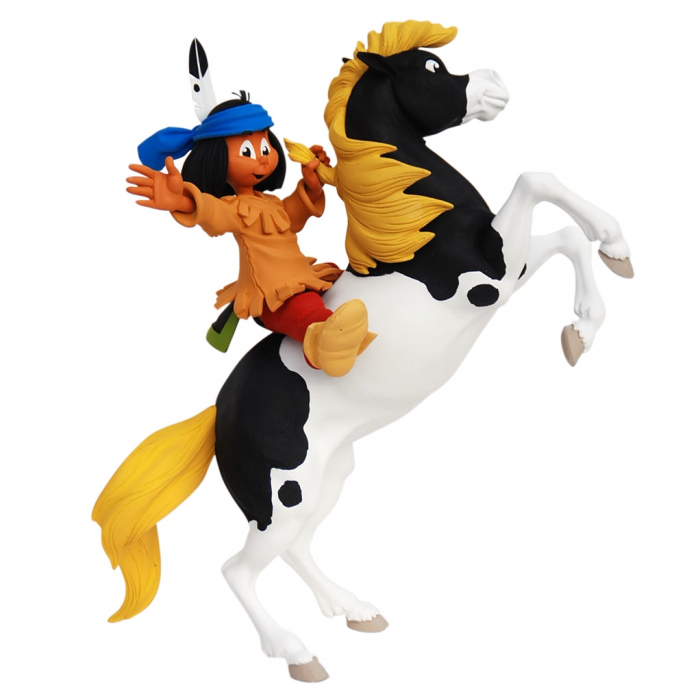 Yakari and his pony Little Thunder: resin statue molded, assembled and handpainted in Edition Originale Workshop (100% Made in France). Limited edition to 150 units. Accompanied by a signed and numbered certificate.

Yakari is a Franco-Belgian comic book series, aimed at a younger audience, written by Job and illustrated by Derib, both from Switzerland.
Yakari has (on two occasions, 1983 and 2005) been adapted to a cartoon series on television, a movie was announced.

Yakari is one of the most well-known Franco-Belgian comics in Europe.

Yakari is a young Sioux Native American who has the ability to understand and speak animal languages. During his adventures, he meets all sorts of North American animals. His best friends are a girl Sioux, "Rainbow", a Sioux boy "Buffalo Seed" and his pony "Little Thunder". He has a totem animal, "Great Eagle", who frequently appears to him to give him critical advice.

The setting is the North American Great Plains, mainly. Horses have already been introduced by the Spanish, but there is no mentioning of white man whatsoever in the series. (In one book, there's even a mention by an old tribesman that there's a mystery how the horse came to the land, and that it hasn't always been there.) It can therefore be assumed that Yakari's adventures take place after the 15th century, but long before the settling rush in the late 18th/19th century.

The comic shows a very positive view of the culture of the Sioux and depicts them as peaceful people who live in harmony with nature.