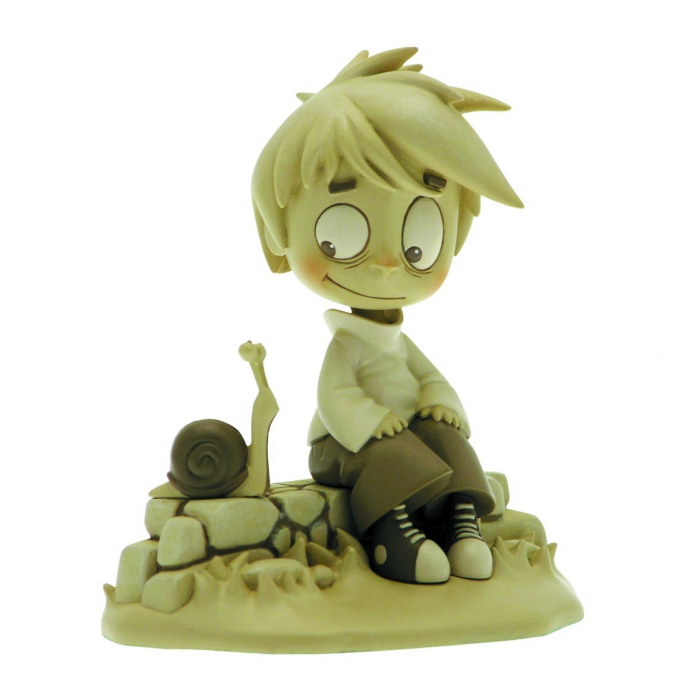 From Attakus! Designed by Alberto Varanda based on the book Petit Pierrot, this statue depicts the little boy sitting on the ground next to a snail. Absolutely cute and irresistible, this 3 3/4" tall statue will charm you!.

Alberto Varanda was born in Portugal, but moved to France in 1968. After his studies, he assisted a female artist, who introduced him to Xavier Fauche and Jean Léturgie. They asked him to cooperate on the 'Rantanplan' series and he agreed. And so Varanda pencilled several 'Rantanplan' gags that were inked by Michel Janvier. He had a brief stint in animation, working with Franquin on 'Les Tifous' and on the 'Lucky Luke' cartoon, but this didn't suit him. From then on, he focused on comics and started a cooperation with Tintin magazine.

After meeting Fournier and Wasterlain, his work also appeared in Spirou. He also drew for the Casus Belli magazine for a while. He started working with the writing duo Anne and Gérard Guèro (Ange) and they created 'Reflet d'Écume' at Vents d'Ouest publishers. This first album was soon followed by 'Bloodline' and 'La Geste des Chevaliers-Dragons'. Varanda also drew the covers of the novels that the Anges wrote. In 2002 they started the trilogy 'Paradis Perdu' at Soleil publishers.