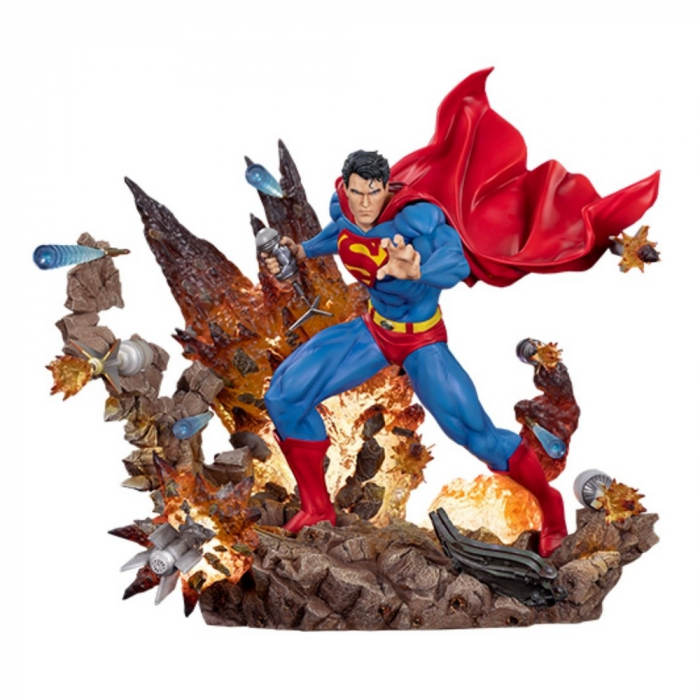 First Oniri Creations statue from the DC Comics range, Superman: For Tomorrow. Celebrating the 15th anniversary of the legendary Superman cover #205, this statue shows the Man of Steel in full possession of his powers. Each statue comes with 2 interchangeable heads. Limited and numbered edition of 999 copies with certificate of authenticity. Height: 35cm.

This is Oniri Creation’s very first statue from their new DC 1/6 Scale line. Celebrating 15 years of the epic Superman 205 cover, this statue depicts the Man of Steel in all his power.

Clark Kent may be the ultimate Boy Scout, but he also knows when to mean business, especially when taken on by an entire army. Oniri Creations has created this diorama showing Superman like he’s rarely been potrayed in statue form. Translating an author's art in 3D is no easy task. Going the realistic route wasn’t going to work here, so our sculptor went for a very stylized and chiselled anatomy instead.

Oniri Creations also spent a lot of time working on the portraits, trying to capture the definitive Man of Steel’s likeness. Taking heavy enemy fire, our hero shows just how powerful he is, by stopping missiles and bullets with his bare hands. Meticulously placed around Superman, the bullets and missiles give an immersive perspective effect as you move around the statue.