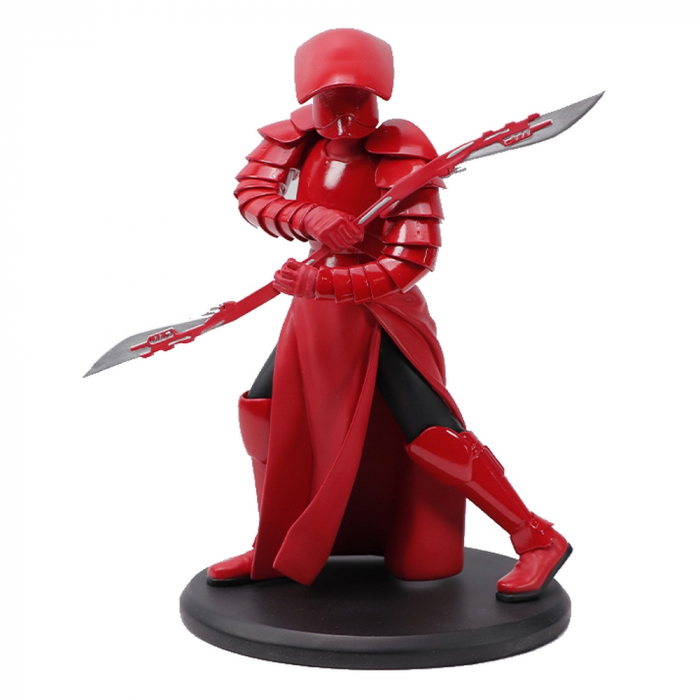 This highly trained guard, dressed in red armor and robes, belonged to the Elite Praetorian Guard, composed of 8 human warriors, and served as an elite personal bodyguard to Supreme Leader Snoke, leader of the First Order.

The Elite Praetorian Guard were eight highly trained human warriors that served as elite personal bodyguards of Supreme Leader Snoke, ruler of the First Order. As such, they were trained to protect the Supreme Leader by meeting any threat with a ferocious response. Clad in red armor and robes, the Praetorian Guard specialized in several forms of martial arts and carried various high-tech melee weapons.

The Praetorian Guard was stationed aboard the Supreme Leader's flagship, the Supremacy, during the conflict between the First Order and the Resistance. It was in Snoke's throne room where the guards witnessed their master's death at the hand of his apprentice, the First Order warlord Kylo Ren. In response, the Praetorians attacked Ren in an attempt to avenge the fallen Supreme Leader. Despite their efforts, the entire Praetorian Guard was destroyed by both Ren and Rey. In the aftermath of Ren's battle with the Praetorians, the dark side warrior claimed the mantle of Supreme Leader for himself.